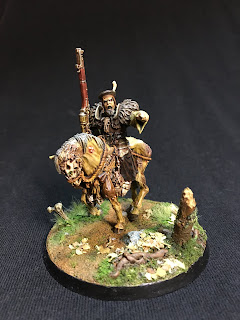 Once a noble huntsman who kept the King's Grove with integrity and respect for the animals he put on the Noble's tables, the shift into the dark realm proved too dire for the Royal GameWarden.

The King's own madness infects this once loyal subject, as he relentlessly hunts any who dare enter the twisted forest the King's Grove has now become. 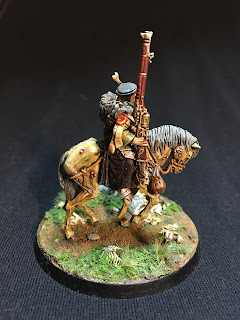 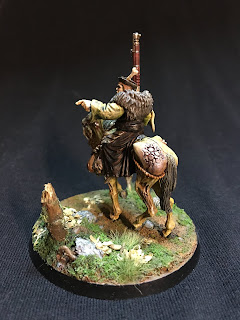 ***************
The GameWarden was a fun one to make. I've had plans for years to make a similar model for the Inq28/Necromunda setting, but the fantasy-version concept of the character worked so well for the Torpor campaign, I stripped away the technological bits from the original idea and stuck him together.

I'm trying to use as many old pieces I have lying around as I can these days, and the GameWarden is a pretty varied hodgepodge of bits. The horse is from the old mounted Plague Lord, with a cut-down and greenstuffed Chaos Warrior torso. Gun arm is from the Mechanicus Skitarii, and the pointing arm is from an old Empire cannoneer. The head is a plastic Catachan guardsman with the beard, and coif and hat sculpted from greenstuff.

There are two things I noticed as I finished this figure. One was the hugely visible seam on the horse's rump where the two halves of the horse came together, and I forgot to fill it in. The second, is that I just don't give a damn.

The pursuit of perfection stymied a lot of my work over the years, keeping me from getting models finished, and was one of the many things that drove me to break from the hobby a few years ago. Playing D&D this past year, and recently returning to modelling and hobby-blogging, I feel like I have a new perspective on the enjoyment I actually want out of all of this, and things like that seam...meh. Who cares.

Having said that, I do wish I had a decent camera to show off some of the finer details on the base. Ah well.

Thinking of what's next for this week, I'm trying to decide whether to do some batch painting on some models sitting around the desk, or to work on a hunting party for the GameWarden...